Goa is one of the small states of India. It is situated on the west coast of India. Goa is famous for its beautiful beaches, Forts, churches, and temples. Dudhsagar Falls, Fort Aguada, Se Cathedral, Bom Jesus Basilica, Wax museum, Salim Ali Bird Sanctuary and Shanta Durga Temple are one of the famous destinations in Goa.

Tourism is a prime industry in Goa. According to a travelling survey in the year of 2018 more than four million tourists reported to have visited Goa. With more than 22% foreign visitors which arrives India, land to Goa, becomes it the hottest destination for the foreign tourist. 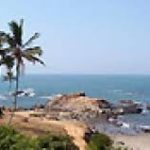 List of destination places for Tour and Travel in Goa

The one reason to visit Goa is its beaches. About 125 KM of the coast line is dotted with beaches. These beaches are divided into North Goa and South Goa Beaches.

In Goa we can many old churches. In these churches the Bom Jesus Basilica church is the most famous one. It holds the mortal remains of St. Francis Xavier, regarded by many Catholics as the patron saint of Goa.

Goa is one of the historic places. You can find many old temples in Goa which of them The Shanta Durga temple and the Malsa temple are among the famous ones.

There are many forts in Goa such as Tiracol, Chapora, Corjuem, Aguada, Gaspar Dias and Cabo de Rama.

There is a Wax Museum located in Old Goa next to the Churches that is beautiful and excited place to see—likely the only one of its kind in India.